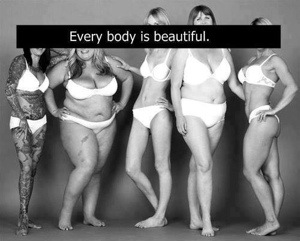 Last night a Facebook conversation erupted into controversy before my very eyes. I’ve spent the past twenty-four hours deliberating my thoughts on it and I’m going to share them with you here.

It started with this status update, from N:

“People, PLEASE, for the love of all that is holy, dress for the body you HAVE, and not the body you THINK you have”.

Let me ask you: What springs to mind when you read this? For me, it was an image of a “mutton-dressed-as-lamb” type, or perhaps some shorts that are perhaps a little tighter than the wearer realised. It actually made me think of the shorts I was wearing at the time, to be honest, and how unattractive my thighs looked, squished underneath me the sofa.

However, it quickly transpired that not everyone drew the same meaning. S replied with the following:

“Or, you could just not look at people who aren’t dressing according to your exacting standards. Signed, a fatty who doesn’t appreciate having to swelter in long sleeves just because thin people think we should. This sort of thing kept me indoors during summers to avoid being pointed and whispered at by people who think the way you do. We have the right to wear what we like, just like everyone else”.

The original poster, N, took considerable offence to the suggestion elsewhere in the conversation, that she was ‘fat shaming’ and ‘perpetuating a myth that fat people don’t know we’re fat’.

In a conversation which included many women, all defended N. She didn’t intend to cause offence, that’s for sure. I genuinely think that hers was an off-the-cuff comment that was probably devised on the tube with someone’s inadequately covered, sweaty backside in far too close proximity.

But the point is, the comment did cause considerable offence, whether intentional or otherwise.

Almost everyone joining debate caveated their offering with words to the effect of “I’m fat, too and I’m not offended.”

Some of the opinions were as follows:

“I really don’t think N is implying that a larger lady should not dress comfortably for hot weather. More so people who wear short shorts up their bums, hipsters and crop tops which are designed specifically to show off certain parts of the body, more than just keep cool, and not over heat”

“People should learn to dress well. Just because it is fashionable to wear crops tops or hot pants doesn’t give people an automatic right to wear them…it is always good when you’re out and about to people watch and think ‘OMG did you see what he/she was wearing?'”

“Can I just say that as a lady of large proportions, I was not offended in the slightest by your comment…”

“As a fatty myself I also take no offence to what’s been said…and I’m fat because I eat too much and I’m a bit lazy, so if I get judged for that then I probably deserve it!”

“I don’t think N is “body-shaming” anybody at all. I think what she’s trying to say is that people could make themselves look better by dressing in something that better flatters their body shape.” 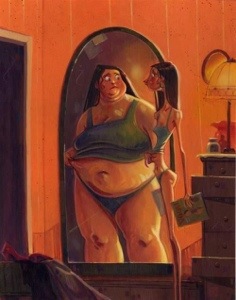 So many parts of this debate fascinated and disturbed me in equal measure that I'm not sure I even know where to begin. Women feeling deserving of judgement because they're overweight, for a start.

The fact that so many women felt the need to clarify themselves as "fat"; seemingly before anyone else got the chance the say it first was really quite shocking to me. I openly admit that I have a problem with the word "fat". To me it is derogatory, demeaning and offensive. So many of us use it to describe ourselves and others, but not just as an adjective. The connotation is that it's something to be very ashamed of.

So ashamed, in fact that someone above said that large people “do not have the right” to wear certain things.

Do. Not. Have. The. Right. Let that one permeate for a moment. We live in a society where women have died and three feminist movements have taken place. As a result we have freedom of speech and expression and (to a degree) equality. There are many, many cultures where women still don’t have voices. They are literally killed for not conforming to oppressive regimes. Yet we women in the western world are implementing sanctions on ourselves based on what society says we should wear. Based on rules which state you can only wear certain clothes if you fit a precise image. If your BMI is under a certain point. As long as you’re not fat.

I have been the judgey person. I have. I have looked at women over a certain age and sniggered inwardly. I have looked at muffin tops (usually in the mirror, truth be told) and I’ve felt disdain. I’ve wondered what-on-earth is she thinking? whilst looking at a more voluptuous form spilling forth from an outfit. I have. And now I am sorry. I really am. Who has the right to say what a women can wear, whatever her size? It really is only society and the media who perpetuate this ideal. And we get sucked in. We turn this negativity inwards and outwards. We allow it to fester and to tarnish our self-image and our self esteem. Then we pass it on to our children. 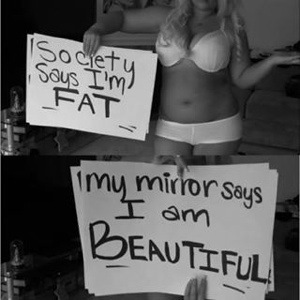 I did some research in to the “F Word”. I wondered if large women openly calling themselves fat was a way of appropriating the word again. Here’s a quote from one of my readers:

“Those of us who are involved in the Fat Acceptance/Health At Every Size movement describe ourselves as fat partly because yes, we’re reclaiming it, but mostly because the only reason it’s seen as an insult is because of societal attitudes. It’s not an insult in and of itself and nor should it be. To perceive it as an insult is to accept that there’s something wrong with being fat.
I often encounter people who, when they hear me describe myself as fat, go “Oh don’t put yourself down!” and I have to explain I’m not; I say I’m fat because I am, and to me it carries no negative connotation. “I am fat” is a neutral and accurate statement of fact just the same as “I have brown hair” or “my eyes are grey”. It is always best to be cautious because there’s no way of knowing how someone fat is comfortable describing themselves or being described without asking, or unless you see/hear them first, but my personal opinion (and that of many other body-positivity people I know) is that other terms are at best euphemistic and at worst, insulting.”

This whole conversation has opened my eyes in many way and is something I’ll be researching a lot more in to.

Again, I want to say that I don’t believe that N intended to cause such offence. That in itself has really made me think about some of the things I post online which are intended to be witty observations but in actual fact could perhaps be very upsetting to some. I recently posted something about poor grammar and the incorrect usage of your/you’re/there/they’re and their. Someone rightly commented that, actually, some people don’t find reading and writing to be straight-forward. I realised I had been judging and I felt dreadful.

On the other hand, I do think we can go too far in censoring ourselves. We should be able to make jokes and engage in banter. But at the same time, we need to be more mindful of who may be reading and what harm our words could cause. I clearly remember a close colleague of mine having to avoid Facebook whilst trying at length for a baby. Not, as you may assume, because she couldn’t bear to see birth announcements and baby pictures. It was because she couldn’t stand to read any more updates from mums complaining about how hard their job as a mother was. It was all she wanted in life and others seemed so ungrateful to her.

Sometimes in life, whether we intend to or not, we upset people. It takes a strong and self-aware woman to let the dust settle, step back and apologise. It’s even harder if you feel the issue lies in the eye (or interpretation) of the offended.

I’ll leave you with these thoughts: Can you envisage being confident enough in your own skin not to take offence in ill-though out Facebook messages?

Can you imagine how you’d feel if you genuinely didn’t care about your weight or your image? If you really loved yourself and saw your flaws as beautiful. If you didn’t judge or feel judged? If you saw beauty in everyone you looked at? Can you imagine giving this gift to your children?

I’ve said it before and I’ll say it again. We are all on the same team, sisters. We really are. Let’s be kinder to ourselves and to each other. Beautiful inside and out, no matter what anyone says. 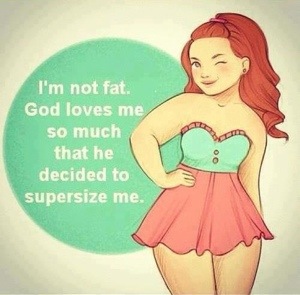 I’d love your thoughts on this. Please remember that this article was written with love so please do comment with love, too. No bashing of anyone, please.

All pictures credited to We Heart It.

5 thoughts on “Our Own Worst Enemies.”