It’s my view that somewhere, way up there, is a higher power, whose job it is to keep us parents in check. To ensure we don’t become too smug, comfortable or complacent. It’s for this reason that once you stop for a second, congratulate yourself for a job well done or a parenting catastrophe avoided, an inevitable disaster will follow. Like the time, very recently, that I made it to the check-out at the supermarket with both of my children still in my sight (actually, they were both still in the trolley. Double win). I managed to employ Monkey as my trolley-unloader and a whole weeks’ shopping was subsequently packed into those ridiculous plastic bags (which are getting THINNER and THINNER on a weekly basis, are they not?! G-d forbid you should try to pack a cucumber in one of those suckers. Cucumbers are akin to hot knives through butter when it comes to slicing open Tesco carrier bags, leaving your perishable produce rolling down next door’s driveway and under their car wheels. I’ve lost entire melons this way. Cucumbers are NOT our friends). But I digress, where was I?

“That’ll be one hundred and whatever pounds, please.” Said the cashier. “Do you have a Clubcard?”
“Yes, I do.” I said. Feeling a bit like one of those organised and together mothers that you see. You know, the ones who don’t forget their re-usable carrier bags and don’t let their children play with their iPhones to keep them quiet in shops.

“My Clubcard is right here, in my…….ohhhhhh”.

At this juncture I felt I deserved extra parenting points for not swearing.

My purse was not in my handbag. I was at home. In the kitchen. On the floor, where Madam had been playing with it.
So, back in the car we went. Of course a thunder-storm of biblical proportions had commenced during our time in the store. Of course we weren’t parked anywhere near the entrance to the store either, thanks to several builders taking up residence in the designated parent-and-child spaces. Of course we weren’t at the supermarket closest to home. Needless to say we hit the school-traffic. It goes without saying that screaming and crying ensued. From all three of us, in fact.

But I learned a lesson that day. Never get too smug. And always check that you have the means to pay for your groceries. My son will now always ask me if I’ve remembered my purse before we go anywhere. And I also now keep an emergency credit card hidden in my car, for emergencies (but don’t tell anyone).

Supermarkets are a parenting minefield. I often think that rather than loyalty cards there should be someone standing at the exit with a congratulatory glass of wine. Or at least a bar of chocolate. I mean, I find it completely impossible to even dress appropriately for a supermarket shop. No matter how cold it is in the freezer aisles, if I have children with me, I will always be sweating. There will always be a crucial item way back by the door that I have forgotten. If I have been organised enough to write a shopping list, it will inevitably still be at home. If I have remembered the list, I will forget to look at it. If I look at it, I won’t cross things off. So I’ll still require several more arduous trips to the supermarket in days to come. Even online shopping seems to result in several extra visits to the shops. I have a theory that supermarkets deliberately withhold items from your delivery to force you back in to their stores to top-up and spend more money.

I wonder if I’m the only person who occasionally forgets that sometimes there isn’t a child present when I shop. Who every-so-often rocks a childless trolley back-and-forth and asks it which yoghurt mummy should buy this week…? Probably just me, then.

I find looking on the bright side is a useful skill when it comes to dealing with small children; when they emptied an entire box of tampons in to the bath a few weeks ago, I was actually quite pleased. At least on this occasion it wasn’t an entire loo roll. The strings made them quite easy to remove from the bath and, unlike toilet paper, they didn’t dissolve and block the drains. Every cloud, see? Lesson learned: Place tampons on higher shelf.

Speaking of bright sides, sometimes my domestic slovenliness has advantages.

For example, I was grateful for the fact that there was a pile of clean laundry which required my attention, when Madam emptied an entire pint of water in to my underwear drawer. (Well actually, she didn’t empty all of it in my drawer. Some of it she tipped on my head in order to wake me up. I’ve filed that strategy away for when she’s a teenager). So luckily, in this instance, my somewhat disorganised laundry system prevented me from going bra-less and commando on the school run. Winner. 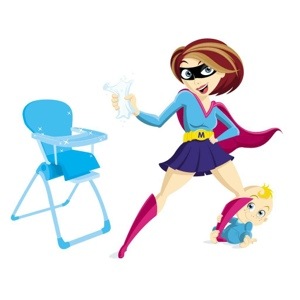 Sometimes it feels like we need superpowers to get through everything required of us in the average day.

Parents are a bit like superheroes, really. Sadly, though, I haven’t worked out how to use my powers for good. For example, I only need a fleeting thought to enter my head for it to come true. Only yesterday I registered that it had been weeks since I’d been up in the night with one of my children. Of course, lo’ and behold I heard the 3am call of “Mummmmmyyyy, I want to get in your bed.” Superpowers, see? I made that happen. Similarly, I only need to observe that I haven’t wiped a snotty nose for a while for one of my children to instantly come down with a cold. It’s a similar logic that ensures that it will ALWAYS rain the day I paint my toe-nails. How does this work?! And why can I not use this power for lottery wins or solving the middle eastern peace crisis once and for all?

Often I think that resolving the conflict in the Middle East would be far simpler than refereeing a room full of three year olds having a playdate. I wish I knew the reason why one lone, broken and forgotten little car will suddenly become the most sought-after toy since the Cabbage Patch Doll phenomenon in the ’80’s. Everyone wants it. Superhero powers would come in handy here, but I find diversionary tactics work better.

Did you know that children have Super-powers too? Take afternoon sleep, for example. Children have a unique power to turn a five minute nap in the car at 5pm in to the equivalent of a three hour sleep. It’s worth more than the sum of its parts. One of the only things I remember from science lessons at school is the equation for speed. Speed = Distance divided by time. I wonder if a similar sum applies to car sleep. Rest earned = miles per hour multiplied by proximity to bed-time, or something. I only wish I could recharge my batteries as quickly as my two year old can in a car-seat with a five minute power nap. It’s a super-power, I tell you. And you can kiss that nice quiet evening on the sofa goodbye as a result.

These kids can turn things invisible, too. Either that, or somewhere in my house there’s a secret room to which only they have a key. It currently holds one very small red slipper, one half of a pair of cordless telephones (which I keep thinking I’ve finally found, only to have my hopes crushed when I realise it’s the same one, again.), a remote control, a favourite bowl, a very first shoe and several cosmetic items.

It’s interesting how for much of the day I’d like nothing more than a few minutes’ peace. But any parent of littles will tell you that there is absolutely nothing as suspicious as the sound of silence in a household containing awake children. My wooden floor will never be the same after my two emptied an entire, large tub of sudocrem everywhere in the time it took me to go upstairs, have a wee an put on my shoes. Of course they were dressed in their nicest clothes. Of course we were running late for a lunch date. Have you ever tried to remove sudocrem from skin? That stuff is designed to stick. I practically needed a sandblaster to remove it from them. I was just about to remark that they haven’t tried doing that again. I won’t though. For reasons stated above.

It’s my experience in my four years’ of parenting that whilst mistakes are plentiful, learning is continuous. Most days I learn something new. It’s not always something that I need to know, though. Like the fact that the simultaneous wearing of three contact lenses induces headaches, for example.

Often your children even enlighten those around you with knowledge. Such as, when I was using the loo next to the doctor’s waiting room. My son announced loudly that I was having a poo. I wasn’t, as it happens, but I thought there may have possibly been one person in the waiting room that hadn’t heard him, so I decided against clarifying the situation to my fellow patients.

I have learned to never, ever put your own coat on before those of your children. I think it’s a similar logic to fastening your own oxygen mask before anyone else’s on an aeroplane. Putting your own coat on and subsequently trying to fasten zips on two moving targets in a recipe for disaster, bad-temper and possible collapse.

I have learned that spontaneous mooing can, on occasion, divert the mother-of-all meltdowns. That you should never, EVER, remark that your child has never poo’d in the bath. (See reverse super-power point, above.) In related news I learned that those little stacking cups with holes in the bottom are useful for sieving said-poo from the bath.

I have learned to always ask exactly where on a plate a child would like their ketchup. This is one mistake I have not made twice, I’m pleased to say.

I have learned that when your child wishes you good luck rather than goodnight, you’d better brace yourself.

But more than anything I’ve learned that every shocking day, is usually and conversely followed by a good one.

9 thoughts on “A Lesson in Parental Superpowers”

I'd love your thoughts! Please leave a comment. Cancel reply